Complete Guide On How to Close a Local Company in Singapore 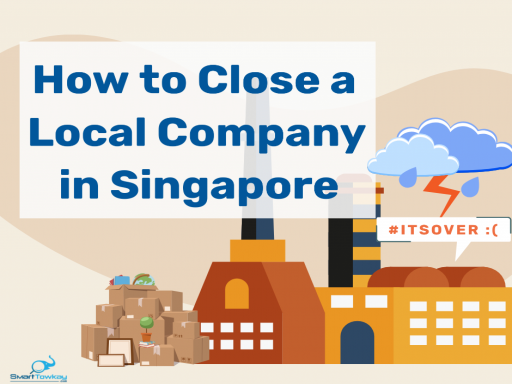 ﻿Let’s face it, 2020 was a brutal year, especially for small businesses. The global economy came to a virtual halt due to the spread of Covid-19, and Singapore’s own gross domestic product (GDP) shrank by 5.5 per cent. SME business sentiment sank to a record low.

While Singapore’s economy is slowly getting back on its feet, we are a long way away from full recovery and 2021 looks to be a tough year ahead still.

As such, it should come as no surprise that many companies have had to shutter in recent times and more may be forced to do so soon. However, doing so is not as easy as simply closing down any physical premises and refusing to do business anymore; official steps must be taken. Moreover, there are different ways of closing a company, depending on the circumstances surrounding the unfortunate event.


Is there really no alternative?

Perhaps the first consideration to make is whether you must really resort to closing your company. The current economic situation is understandably rough, but the Singapore government has introduced a host of measures and support.

Legally speaking, the Covid-19 (Temporary Measures) Act 2020 has put in place certain safeguards to ensure local companies are protected from being sued or forced to close by creditors. Landlords have been strongly encouraged to extend rental reliefs to tenants. Meanwhile, the Re-Align Framework allows eligible small businesses to renegotiate or even set aside commercial contracts without penalty.

In addition, the government also introduced a whole litany of grants and support schemes targeted at not only providing relief for SMEs during this Covid-19 crisis but also to help businesses transform and get ready for the post-pandemic world.

If, despite all this assistance available, you find that there is really no way to keep your company alive, then you will have to begin proceedings to close. Generally speaking, one can do so by one of two ways: striking off the company’s name from the Accounting and Corporate Regulatory Authority’s (ACRA) register or winding up the business.


Striking off a company

Under section 344A(1) of the Companies Act, a company can make an application to ACRA to strike off its name from ACRA’s register. To do so, the company director or company secretary simply has to submit an online application via BizFile+ using SingPass or CorpPass to strike off the company. There are no filing fees for this. A registered filing agent may also be authorised to do so for the company.

There are some requirements that need to be fulfilled before ACRA considers striking off the company. They are:

If all these requirements are met, ACRA can approve the application to strike out the company. ACRA may then send a notice to the company’s registered office and its officers. If there are no objections after 30 days, ACRA will publish the name in the Government Gazette Notification for any creditor or concerned person to object to the company’s name being struck off the register. If there continues to be no objection after another 60 days, the company will be officially struck off the register and cease to be a corporate entity.

Other things to take note of include having to apply for cancellation of GST registration if the company is GST-registered.

Also, a director will be disqualified from taking part in the management of a company in Singapore for five years if he has three or more companies whose names were struck off ACRA’s register within a period of five years. The five-year penalty will commence from the date that the third company was struck off.

Another way to close a company is by winding up. This may be done voluntarily, or the company may be legally compelled to do so by the Courts.

A shareholders’ voluntary winding up occurs when the company decides on its own initiative to cease its business activities. To qualify to do so, the directors must believe that the company is able to pay its debts in full within 12 months after the commencement of the winding up.

The company will then undergo the process of liquidation, selling off its assets and using the funds to repay its debts. Any remaining funds will be distributed accordingly among the shareholders.

If a company is insolvent, or cannot fulfil its financial responsibilities within 12 months, the company will have to pursue a creditors’ voluntary winding up instead. This means the company meets with its creditors and gives them the option of winding up the company. Creditors may wish to take this option so that they can regain a portion of their debt owed, if not its entirety, after the company’s assets have been liquidated.

Administratively, the entire process must be in line with the provisions stated in the Insolvency, Restructuring and Dissolution Act 2018.

If the process is less than amiable, a more contentious (and costly) way is to get the Singapore Courts involved in order to legally force the company to wind up. This is usually done by a creditor, although members of the company itself, or liquidators, or judicial managers (more on this later) can also make a compulsory winding up application to the Courts.

To do so, an applicant typically has to make a winding up deposit of S$10,400 to the Official Receiver, and send a Statutory Demand stating the amount owed and giving the company time to make payments. The amount owed must be more than S$15,000. If the company fails to make payment after three weeks, then the unfulfilled Statutory Demand stands as legal grounds upon which the company may be forced to wind up due to being unable to repay its debts.

Upon receiving a compulsory winding up order, the company may appoint a private liquidator to wind up the affairs of the company. Where there is no appointed liquidator, the Official Receiver will be appointed as the liquidator.

Do note that the Courts have wide discretionary powers to decide upon the matter once it has been brought to their attention. They may choose to compel a company to wind up because it is “just and equitable” to do so without requiring a Statutory Demand, but they may also decide that winding up is not the best course of action for the parties involved. There is an element of unpredictability to this, and a compulsory winding up should not be sought unless a party feels there is really no other option.

As mentioned, the Courts might not feel that winding up a company might be for the best and instead instruct that the company be turned over to an independent judicial manager to manage its affairs, business, and property. Alternatively, creditors may also wish to pursue this option instead of voluntarily winding up the company.

Judicial management is designed to allow for a company in financial distress to recover. During this period, the company is temporarily shielded from legal proceedings by third parties.

As you can imagine, this process is not an easy one and a decision to embark on this course of action is not one to be lightly taken. Typically, it is only done if the decision-making entity feels that there is a very strong chance for the company to regain its financial foothold, or at least to realise its assets in a more advantageous way than to simply liquidate it.


Which option is best?

Obviously, striking out a company’s name from ACRA’s register is the most direct and convenient way to close a company. However, that also requires the most conditions to be fulfilled, not least of which is that the company must be able to satisfy its debts. Otherwise, a creditor can easily object to it and block the company from winding up.

The voluntary and compulsory winding up processes depend very much on the financial circumstances the company finds itself in. Prudent negotiation with creditors, shareholders, or both will then be of paramount importance. The latter, as a more extreme and inconvenient method, is the least recommended unless absolutely necessary.

Processes such as judicial management and receivership are complex and risky. They would have to be assessed on a case-by-case basis, and would typically only be undertaken by large professional organisations with both the means and the expertise to do so. Read also: Uncertain Times Still Ahead for 2021 – SME Loans Available Under Enterprise Singapore
Read also: Complete Guide To EDG Strategic Brand And Marketing Development Grant - What Are Claimable?

An Introduction to Setting Up an Offshore Company in Singapore

﻿Filing and Serving a Claim with the Small Claims Tribunal - Singapore

Do Food Safety Regulations Need To Be Updated for Home-Based Food Businesses?