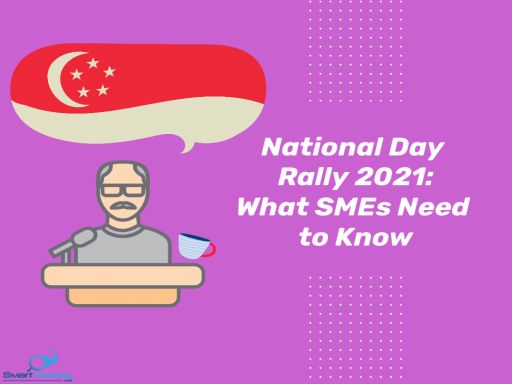 That Prime Minister Lee Hsien Loong was only speaking at the National Day Rally at the end of August is a testament to the trying year that Singapore has had. Of course, it is also a sign of how things have improved since Covid-19 broke out last year; after all, the National Day Rally in 2020 was canceled altogether rather than merely delayed.

Nevertheless, the main thrusts of PM Lee’s speech could hardly have deviated from the pandemic and the myriad of issues that it has either caused or massively exacerbated.

A lengthy update on Singapore’s vaccination rate – having recently passed the 80 percent mark – and how that can lead us towards a “Covid resilient” future where the virus is endemic, but much less harmful, was to be expected.

But the Prime Minister also made several significant announcements that could heavily impact businesses and the economy, particularly SMEs.

In times of economic hardship, lower-wage workers suffer from a double whammy. Their lower salary often means that they have very little savings to rely on and any negative impact on their income would have more severe consequences on their lives than it might for the average Singaporean. In addition, as these employees’ jobs are often the least secure, and pit them more in direct competition with foreign workers, leading to more stress and possible tensions regarding race and religion.

PM Lee highlighted that lower-wage workers in Singapore do get help, from policies like Workfare and the Progressive Wage Model (PWM), but that more will be done for them.

To that end, the age to qualify for Workfare will be lowered from 35 years old to 30 years old in two years' time.

The PWM, which lays out salary and skills ladders for various industries, will also be expanded to many more industries – first to retail next year, then to food services and waste management – and it will also start to cover certain occupations that cut across industries, starting with administrative assistants and drivers. The timeline, as reported in the Straits Times, is as follows: 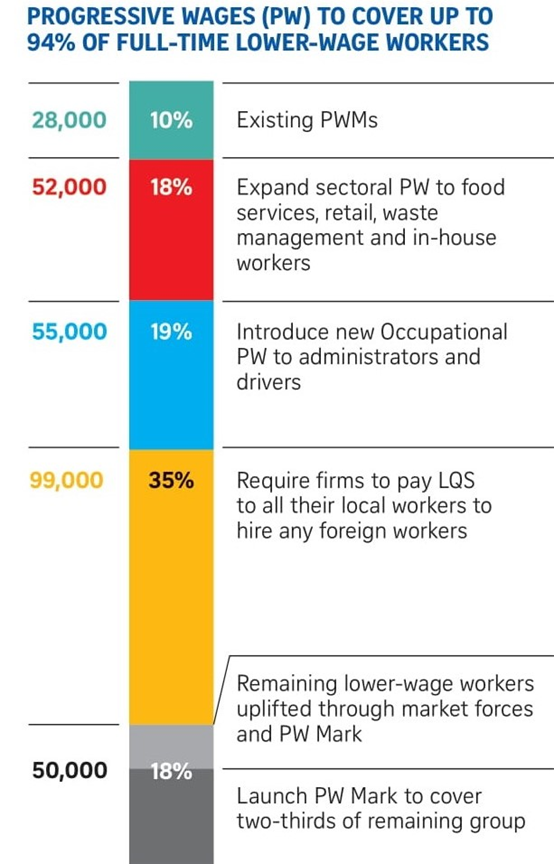 Unfortunately, PM Lee did not elaborate on how this would be accomplished. This is pertinent because one of the main criticisms of the Progressive Wage Model was how complicated it was, causing it to take a very long time to implement. Since its introduction in 2012, the Progressive Wage Model has only been established in the cleaning, security, and landscaping sectors. These represent only about 15 percent of all the workers in the lowest 20th percentile of salary ranges. For it to now be so rapidly and radically expanded to so many other industries would either be a damning indictment of the Government’s past efforts or a warning sign about how it might not be implemented well. This warrants scrutiny.

A Progressive Wage Mark accreditation scheme is also slated to be implemented to flag firms that are paying all their workers progressive wages, so that consumers can support them. This is expected to help boost the wages of another 12 percent of the 50,000 low-wage workers not covered by the other schemes.

In addition, firms hiring foreign workers will also have to pay a salary of at least S$1,400 to all local employees. Companies currently have to meet this Local Qualifying Salary before they can count the employee towards their quota for hiring a foreigner, but do not have to pay every employee a minimum amount. PM Lee went on to state that the Local Qualifying Salary will be adjusted from time to time.

Astute observers will probably note that this move has essentially all the hallmarks of a minimum wage policy, albeit in slightly more limited circumstances. This appears to put to bed the arguments about whether the PWM or a minimum wage policy was superior. We noted at the time that a combination of the two, in varying degrees across different sectors, would probably complement each other, and we are somewhat gratified to see that this is indeed the approach taken now.

PM Lee believes these new measures will cover eight in ten lower wage workers and if confident that “almost all lower-wage workers can look forward to higher incomes within the next two years” when taking into account all the enhancements that the Government currently already provides.

Naturally, higher wages for workers is good news for the workforce. But this also means higher operational costs to employers, which might not bode well.

Thus, while ensuring that lower wage workers get a better income is an admirable move, the Government may need to consider how it can support businesses, many of which, lest we forget, have also been suffering badly due to the pandemic, in their obligations to now take on higher labour costs.

PM Lee also acknowledged the fact that Covid-19 has exacerbated anxieties among middle-income Singaporeans about competition for jobs and opportunities at the workplace, and that this has led to unhappiness with foreign workers, particularly in certain sectors.

To address this, authorities have increased the salary cut-offs to qualify for Employment Passes and S Passes.

However, the Prime Minister also announced that the TAFEP (Tripartite Alliance for Fair & Progressive Employment Practices) guidelines would be enshrined into law, making it an official legal obligation rather than just a set of practices that companies are encouraged to adhere to. This allows for more punitive action that can be taken against those who do not abide by them.

There will also be a tribunal created to protect workers against discrimination based on nationality, as well as other kinds of discrimination covered by TAFEP, such as that based on gender, age, race, religion, or disability.

These measures go both ways; those who have justified fears about how foreign workers are unduly taking their jobs will have more recourse, but those whose actions stray too far to the other side of the spectrum due to unjustified fears abut foreigners will also be taken to task.

Ultimately, companies may have to review their hiring practices and workplace culture to ensure that there is no lack of oversight in the ways that their employees have been hired and subsequently treated.

Furthermore, on the subject of racial discrimination, PM Lee insisted at length that racial harmony in Singapore has been achieved, although recent racists incidents have shown how “fragile” said harmony is.

His somewhat absolutist stand continued with the declaration that “we treat all races equally, with no special privileges”. Ever since the inception of our nation, the different races have not been treated equally, and that is not always to their detriment. People commonly cite the Tertiary Tuition Fee Subsidy (TTFS) Scheme, an education subsidy for Malay students, as an example. Having noted that that racial discrimination still happens and that minorities are the ones most affected by it, it should not be controversial to also acknowledge that race-conscious policies do exist and that the important thing is to carry them out in a sensitive and correct way.

The introduction of a new Maintenance of Racial Harmony Act is one such policy that will contribute to the ongoing conversation and shifting of social attitudes. It will collect together in one place all the Government’s powers to deal with racial issues, which are currently scattered under various pieces of legislation, such as the Penal Code.

It will also incorporate some “softer and gentler touches” like the power to order someone who has caused offence to stop doing it, and to make amends by learning more about the other race and mending ties with them.

PM Lee also said that from November, Muslim nurses will be allowed to wear a tudung with their uniforms, if they wish to.

No matter the choice of words used, the fact that our Prime Minister is addressing it in his National Day speech, and that the Government is enacting new, albeit “softer”, law over the matter, proves that racial discord still exists in Singapore society. Companies and businesses must not deny this reality and work to become more racially sensitive.