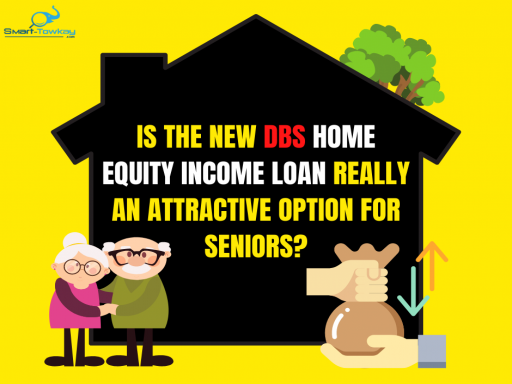 It is no secret that home ownership in Singapore is particularly high, especially when compared to the rest of the world. This also means, however, that our retirees tend to have most of their finances tied up in their home properties, leaving them asset-rich but cash-poor and facing a hard retirement life.

While the obvious solution to this problem is to simply sell the property and down-size to a smaller home in order to free up more cash, this is not always a feasible option. Many of the seniors have been living in the same neighbourhood for decades and may not be able to acclimatise to new living environments. The process of moving itself can also be problematic for elderly people.

An alternative comes in the form of reverse mortgages. Essentially, one can borrow money against their property, and the amount (plus interest) is expected to be paid back either when they die or when they sell the property.

The long-running HDB Lease Buyback Scheme already exists to provide such an option for HDB flat owners, but this does not apply to private residential property owners.

Until Monday (16 August), which saw the launch of DBS’ Home Equity Income Loan.

What is the DBS Home Equity Income Loan?

As a partnership of sorts between the Central Provident Fund (CPF) and the Development Bank of Singapore (DBS), the DBS Home Equity Income Loan is a new loan product that allows senior retirees to borrow money at a fixed rate against their fully paid private residential properties. The money will go towards their CPF retirement sums, allowing them to receive higher CPF Life monthly payouts.

The maximum amount that can be borrowed by an individual is the amount one needs to reach the current CPF Enhanced Retirement Sum. That amount in 2021 is currently $279,000, which means one can only borrow an amount that is S$279,000 minus what they currently have in their CPF account.

The loan period can be up to 30 years till the customer - or the youngest borrower in the case of a joint loan - reaches 95 years old, with a fixed interest rate of 2.88 percent a year.

Naturally, there are also certain conditions that need to be fulfilled. This reverse mortgage loan is only open to Singaporeans and permanent residents aged between 65 and 79 years old. They must also own and stay in a private residential property that is fully paid up and must not own any other property. The property should also have at least a remaining lease of 30 years.

In addition, there is also a requirement for the borrower to set up you a Lasting Power of Attorney (LPA).

What are the advantages of this loan?

As this loan was specifically designed for the group of seniors who own private residential property but are in a situation where they don't have sufficient retirement income, its terms are quite favourable.

The fixed interest rate gives these seniors certainty of how much they must pay back at the end, and the interest rate of 2.88 percent is much lower than the Singapore Bank Lending Rate, which has been averaging 5.525 percent per annum since 1980.

In addition, since the current CPF Life premiums are earning an interest rate of 4 percent, borrowers of this loan are still earning the difference of 1.12 percent. Of course, since the money in the CPF account will be constantly reduced as funds are disbursed monthly, there will almost certainly be no profit; this is not an investment product, after all. But it does mean that the interest that one has to pay when the loan matures would, in actuality, tally up to less than 2.88 percent per annum.

There are no caveats either when it comes to repaying the loan. The lump sum is payable only at loan maturity, so there are no monthly loan repayments. Customers can sell their property any time and repay the loan without a penalty fee. If the customer chooses to leave the property to their children, proceeds from other assets can also be used to pay off the loan. In the event that the loan is terminated early due to the customer's death, DBS will look at alternative terms of repayment, instead of immediately repossessing the home.

Are there any drawbacks to taking this loan then?

Reverse mortgages have traditionally not been very popular in Singapore, which is why they were offered before by various financing institutions but were subsequently discontinued due to lack of demand. Only 24 HDB homeowners took up reverse mortgages between 2006 and 2009, and by 2014, NTUC Income was servicing only 38 private properties and 10 HDB reverse mortgages.

A survey conducted in 2020 showed that only 25 percent of older homeowners were interested in taking up reverse mortgages, and the reasons for their disinterest is as shown below.

However, it must be said that this loan does guarantee one will not have to face one of the most dangerous risks involved in mortgages themselves.

Mortgages are generally capped at 70 percent of the property’s prevailing value (or 75 percent for first-time homeowners) throughout the tenure of the loan, in what is known as the loan-to-value (LTV) ratio. The same is true for a reverse mortgage loan as well; if house prices were to decline to a value that is below the LTV cap, the lender would stop paying the borrower and instead take steps to recover the loan at least until the LTV ratio is reached again. This means that if the value of the house drops, the borrower might find their monthly payout severely decreased, or even have to make monthly payments back to the lender instead.

A legal claim in 2009 was filed precisely over such a circumstance. A couple had entered into a reverse mortgage contract when their home was valued at over S$2 million. However, the house value then fell to S$1.1 million after a number of years, and the borrowers were informed they needed to make cash repayments to bring down the LTV ratio. When the couple did not do so, causing their outstanding balance to balloon to over S$1 million, NTUC Income repossessed and sold the property to recover its loan. The couple was even asked to pay the alleged shortfall of S$55,000.

Under the DBS Home Equity Income Loan, this would not happen. In the event that the value of the property declines during the loan period, the borrower is not required to make any payment to reduce the outstanding loan amount as long as there is no event which triggers early termination of the loan.

In addition, even if the borrower outlives the loan maturity or goes bankrupt during the loan period, DBS promises not to take immediate action to foreclose the property but will work with the borrower (or the borrower’s estate) to find mutually acceptable alternative repayment methods.

Ultimately, this loan was really designed to suit the purposes of a specific group of people in a specific situation. For other elderly people, there could be better options out there in terms of increasing retirement income. Those include the aforementioned down-sizing of home, renting out part of the property to earn rental income, or taking an actual bank loan to receive a lump sum payment that could then be reinvested for higher returns.

A loan is a loan, and financial situations are never immutable. There will always be risks, and a burden that one has to bear, or place upon the next generation to bear. The DBS Home Equity Income Loan is no different in that regard.

However, for those who really require a higher amount of retirement income while still living in their current home, and accept that to do so, they may not be able to leave said property behind for their estate, this loan is a more-than-viable option and is a good complement to the HDB Lease Buyback Scheme by extending what the latter does for HDB homeowners to private residential property owners.

Read also: What Are SME Centres And How Do They Help Businesses in Singapore? Smart Towkay Partners with SMCCI
Read also: Roles and Responsibilities of a Company Secretary

﻿Property Tax In Singapore – What Are The Rates And How Are They Calculated? 2022 Edition