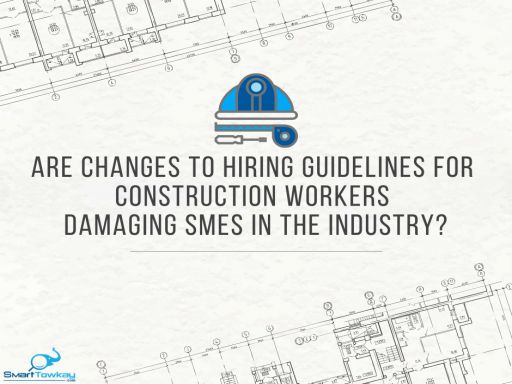 ﻿﻿﻿﻿﻿﻿﻿﻿﻿﻿﻿The construction sector in Singapore is in a bind. As an industry heavily dependent on foreign workers, the construction industry has been hit particularly hard by the curtailing of foreigners travelling into the country brought about by the COVID-19 pandemic.

As it grapples with the shortage of foreign labour that is causing disruption to their project timelines, amongst other problems, strong appeals have been made to the Government to allow for the entry of more foreign workers and for more relief measures. The authorities’ moves in response, while well-intentioned, do not seem to be particularly successful in alleviating the problem.

Caught between a rock and a hard place

The global coronavirus crisis has forced the Government to balance obvious healthcare priorities with economic concerns. As every nation tightened their borders to varying degrees, Singapore’s leadership came under fire from some of our own people for perhaps not closing our borders comprehensively enough. This criticism became more fervent in the wake of the more virulent variants of COVID-19 emerging in India that have subsequently made their way to our shores.

Yet the Government has also pointed out that had it barred migrant workers from entering Singapore after last year's "circuit-breaker" period, there would now be 30,000 fewer construction workers in the Republic working on key infrastructure and building projects, as well as shortages in the services sector.

As it is, the outflow of migrant workers has still exceeded the inflow. Many workers are choosing, rather understandably, to return home after their contracts have ended while the existing border restrictions to limit importation risks mean that we are not adequately replacing the ones who have left, even though the reduced intake is already causing consternation to some people.

Many building and housing projects have been delayed. It was already reported before the latest travel restrictions on travellers from India were announced that 85 percent of BTO projects were facing 6 to 9 months’ delay, affecting more than 43,000 households.

Whatever the Government does, there will inevitably be sacrifices and not everyone will be placated.

Naturally, steps have been taken to assuage the pains and burdens suffered by the construction sector. It was announced by the Ministry of Manpower (MOM) last month that about 15,000 firms in the construction, marine and process sectors will receive higher foreign worker levy rebates of S$250 per month, up from the previous S$90 per month, between May and December 2021.

In addition, a third amendment to the COVID-19 (Temporary Measures Act) was passed in Parliament, allowing construction firms to seek adjustments for higher manpower costs from their contract partners.

However, these do not address the issue of labour shortage.


Measures to mitigate foreign worker shortage not working out?

A new programme to let firms get temporary flexibility to recruit workers from China by allowing new work permit holders from China to get their skills certification in Singapore, rather than having to first enrol in overseas testing centres (OTCs), is said to be of limited help since Chinese workers command higher salaries and are more reluctant to move to Singapore to work.

Meanwhile, workers from South Asian countries such as India and Bangladesh have been restricted from entering Singapore since 2 May 2021 due to the rampant spread of COVID-19 cases in those regions.

This situation has led some companies to allegedly poach workers from other firms by offering higher pay in order to get the labour they need to finish their projects.

Strangely enough, MOM seems to be abetting this behaviour, having introduced a new guideline whereby existing construction workers can transfer to another employer without the approval of the current employer.

Previously, employees could switch employers at any time while their Work Permits were valid (up to 21 days before expiry) but required the consent of their current employers in order to do so. 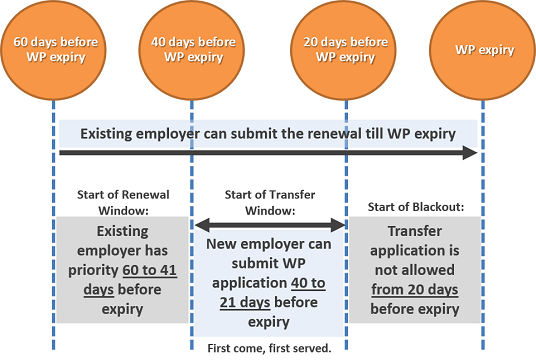 Hiring experienced workers who are already working in Singapore clearly has its benefits. There is a faster deployment time, and there is less cost involved than through the process of bringing in new workers. At a time when new workers are scarce, it is also simply another way of addressing one’s manpower needs. Employment agencies who match employers with workers will also be able to garner some revenue through companies wanting to exercise this provision.

Looking at the bigger picture, this goes some way in retaining the workforce that we currently do have; bringing in new workers is already terribly difficult now as it is, so market forces do dictate that the workers still in Singapore are worth more to keep. However, this move is also tantamount to subjecting construction firms who require workers to a competition (albeit to a limited extent) that many can ill-afford to take part in.

Workers whose Work Permits are expiring know that they are in demand, and can simply hold out until the eligible application period to seek out an employer who is willing to pay more for their services which in this labour shortage climate, they know that they can demand higher remuneration.

The former might not be feasible, especially if the existing employer is a smaller construction firm while the more established construction powerhouses in Singapore are likely to have the resources to markedly increase salaries to hire workers in order to finish their projects on hand. This will result in an imbalance that is significantly disadvantageous to smaller companies, which would be contrary to what Minister for National Development Desmond Lee had declared about how no single stakeholder group in the construction industry should bear "undue share" of the burden imposed by the COVID-19 pandemic.

The latter would be very costly and, perhaps more importantly, would render this move counter-productive if many firms are losing their workers more easily instead of bolstering their ranks.

It does not seem that the Government is unaware of the potentially drastic drawbacks of this arrangement. It has subsequently accepted a proposal by the Singapore Construction Association Ltd (SCAL) to introduce a temporary quota system that limits the number of transfers without consent in the construction sector. Employers are assigned a quota for the number of transfers without consent they can take in over a 12-month period, based on their total workforce size. The temporary intervention took effect on 1 Mar 2021, and is currently in place until 30 November 2021.

While this certainly reduces the magnitude of any potentially negative impact, many SMEs remain disgruntled. After all, companies with a workforce of at most 19 can still potentially lose more than 10 percent of their workers.

Quoting from The Singapore Contractors Association Limited (SCAL) on SME's concerns of the new guideline:

On the possible Solution:

SCAL advise companies to try to renew their workers up to 2 months in advance with MOM which is doable through this email, MOM_WPD@mom.gov.sg.

This will help companies to retain workers and at the same time to discuss about salary and benefits adjustment. This is a good time to retain their worker before he/she decides to apply for another company during the 21-40 days no consent period where workers can apply freely to other organisations without obtaining SME's permission to do that.

﻿Meanwhile, if SMEs are looking for workers, they may get into the link https://www.scmx.com.sg/requesttohire, put in their company details and requirements, SCAL system will job match a worker if there is available one that matches and SMEs will be contacted by SCAL.


SCAL do understand the Limitation on the new guidelines:

"While the new guideline does not solve the problem, the COE quota system is actually helping the entire construction industry to reduce the number of job hoppers among the MW and the problems of poaching them. It helps to control and bring down the number of workers wanting to transfer to a significant number.  Companies are now limited to a quota number unlike in the past, they can apply freely without any limits.  So, we are thankful that the system is helping to a certain extend."

Companies that ﻿need assistance to search for an existing Work Permit holder from the same sector who is available for transfer can approach their respective sector associations:

What do you think? Is Your Company affected by the new guideline?

From BooksActually to NOC, Are There Any Easy Answers to Address Workplace Misconduct?

Lasting Power of Attorney in Singapore - A Complete Guide