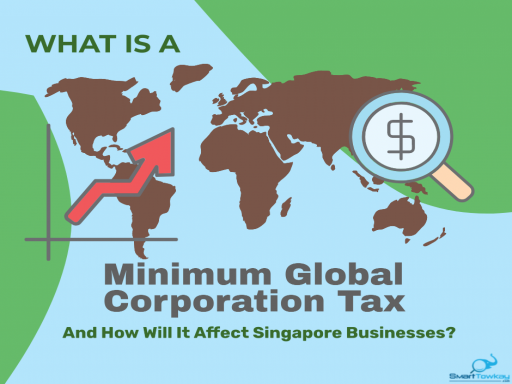 ﻿﻿﻿﻿﻿﻿﻿﻿﻿﻿﻿At the recent Group of Seven (G7) meeting, finance ministers from these seven of the world’s richest nations – Canada, France, Germany, Italy, Japan, the United Kingdom and the United States – have reached a historic agreement to back a minimum global corporation tax rate of at least 15 per cent and put in place measures to ensure taxes were paid in countries where businesses operate.

Proposed by US Treasury Secretary Janet Yellen back in April, the implementation of such a tax is seen as an important and helpful step in overcoming, or at least ameliorating, problems related to corporate tax avoidance and evasion.

But what is a minimum global corporation tax, and how will it affect businesses in Singapore?

Currently, Singapore corporate tax is at 17 per cent.

Type of Corporate Tax In Singapore:
1. Tax On Corporate Profits- 17%
2. Tax rate on captial gains by the company- 0%
3. Tax rate on dividends distributed to shareholders- 0%
4. Tax rate on foreign-sourced income that was already subjected to taxation overseas- 0%
Position of Google AdSense code here, The Ad will appear after you have saved content. This message show only in editor Backend, we will remove it in article.

Multinational corporations and the difficulties in taxing them

International corporate taxation has long presented a challenge for tax authorities around the world. With the emergence of globalization, it is increasingly common for companies to set up different business operations in many different countries. This makes it difficult to decide how they should be taxed, and under which jurisdiction. The rise of intangible capital, largely due to technology, such as software and patents are also assets which are hard to value, muddying the waters as well when it comes to appropriate taxation.

Most economies’ tax systems can be considered either a worldwide or territorial system. In a worldwide system, both domestic and foreign corporate income is taxed. To prevent double taxation, this system usually allows resident corporations to claim a tax credit to offset some of the foreign income tax they have paid. In a territorial system, corporate taxes are only paid on income that is generated within the country’s jurisdiction. Most advanced economies have adopted territorial systems.

This means that multinational corporations (MNCs) can easily restructure their company so as to shift their profits to jurisdictions which demand very little tax. These jurisdictions are known as tax havens, and they range from relatively well-established countries like the Netherlands and Ireland, to infamous offshore islands such Bermuda or the Cayman Islands.

As an example of how insidious this problem could be, Uber was famously reported to have exploited this system to the extreme, having used 50 Dutch shell companies to avoid paying taxes on nearly US$6 billion in revenue.

This has led to billions of tax revenue being missed out on by world governments, and is undoubtedly a major cause of the increasing wealth gap happening across the globe.


Why a global minimum tax?

Let’s assume a company is headquartered in Country A but reports income in Country B. If the tax rate in Country A is set at 20 percent but Country B only taxes 10 percent, it is clearly in the company’s favour. With the implementation of a 15 percent minimum global tax however, after the company pays 11 percent tax to Country B, it then also has to pay Country A the percentage difference between Country B’s 11 percent and the global minimum tax rate of 15 percent in tax, which would be 4 percent.

While it still pays less tax than if it had reported income in Country A, the company now does not have as much an advantage by utilising tax havens, and its home country at least gets a cut of its due.

How much should the tax rate be?

The higher the global minimum tax rate is set, the less attractive it will be for MNCs to shift their profits and tax revenue abroad. This will benefit the home countries of these companies but also adversely affect countries that have relied on corporate tax revenues from foreign companies by serving as tax havens.

The Biden administration wants to raise the U.S. corporate tax rate to 28 percent, so it has proposed a global minimum of 21 percent, with France and Germany in agreement. Meanwhile, the Paris-based Organization for Economic Cooperation and Development (OECD) had been estimating the effects of this tax by assuming a tax rate of 12.5 percent.

The G7 nations have now committed to a global minimum tax of at least 15 percent “on a country by country basis” but it remains to be seen how much of a fight the low-tax countries will put up.

What is clear, however, is that while much wrangling will be done about the exact numbers, the implementation of a global minimum tax rate is almost certainly not going to be denied.


How will this affect Singapore businesses?

Even though Singapore’s headline corporate tax rate is 17 per cent, the effective tax rate of many companies in Singapore could be lower than this due to the availability of tax incentives and the absence of a capital gains tax regime.

Singapore’s very competitive corporation tax rate is one of the reasons why it is so attractive for MNCs and the global minimum tax would undoubtedly affect our corporate tax revenue base.

However, many companies choose to invest in Singapore for a plethora of other reasons, such as our political stability, our strategic geographical location, and our well-educated and diverse workforce. We still have plenty to offer and it is expected that we will remain attractive to foreign MNCs, especially since other countries who charge low taxes will be facing an exodus of companies themselves and these companies may well consider Singapore to be their next best option.

In addition, the Government may render assistance to MNCs in the form of capital grants and other incentives, which are not taxable.

Such schemes may be more effective than low taxes in getting MNCs to commit to Singapore’s other economic goals including training up a Singaporean core or collaborating with SMEs.

By responding decisively and quickly, the Government may manoeuvre Singapore into a position where it may take advantage of the situation instead of only being hampered by it.

To help local companies grow, Singapore introduced the new startup company scheme in 2005 which provides tax exemption on some of the income of a startup. Under the scheme, new companies that meet the qualifying criteria below receive the following tax exemption for the first three consecutive YAs depending on where the YA falls:

The above tax exemption is open to all new companies that meet the following criteria:

Note that certain companies are not permitted to use the tax scheme, including:

Still too early to say

It remains to be seen what the consequences of a global minimum tax will be. For instance, some detractors have already predicted that it will not solve any problems. Corporations who have to pay more tax (which would be most of the world’s largest companies in this case) could always simply charge higher prices to their customers, thereby increasing the countries’ tax revenue but further impoverishing said countries’ people.

It is also not likely to put an end to creative accounting. As we have speculated, Singapore can provide exceptions and exemptions for companies to circumvent the tax to a certain extent, and this is undoubtedly something that all countries will be exploring. A new competition will open up for the savvier enterprises to take the most advantage they can over their competitors, but otherwise not much may change in the bigger picture.

Whatever the circumstances, Singapore’s Government will need to be vigilant and alter its policies as other businesses and governments respond to the impending change.

Read also: Online Corporate Secretarial Services in Singapore 2021 – How Do They Rate Against Each Other
Read also: Roles and Responsibilities of a Company Secretary